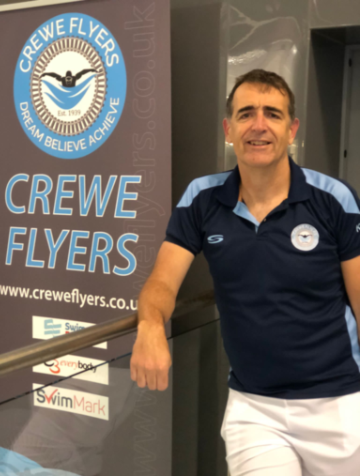 Ken is one of the long standing members of Crewe Flyers since 2008, with both of his children competing for Crewe Flyers.

After taking up a number of roles within the committee, including committee member, chairperson, pool side helper and swimming official, he took his coaching qualification (ASA Level 1 Award in Teaching Aquatics (QCF) Teaching & Coaching) in 2012 and became a member of the coaching team, looking after the junior squad. He also qualified in UK Coaching Safeguarding & Protecting Children with Parnassus CPD in 2020.

His proudest moments are when his swimmers achieve their goals with one being his son Jake making the English Nationals and his daughter Kate making the County Championships.

For his own goals, this was achieved in 2017 when, as a level 2S Judge, he was starter at the Olympic pool at the London Aquatic Centre where he used the same equipment as was used in the 2012 Olympics.