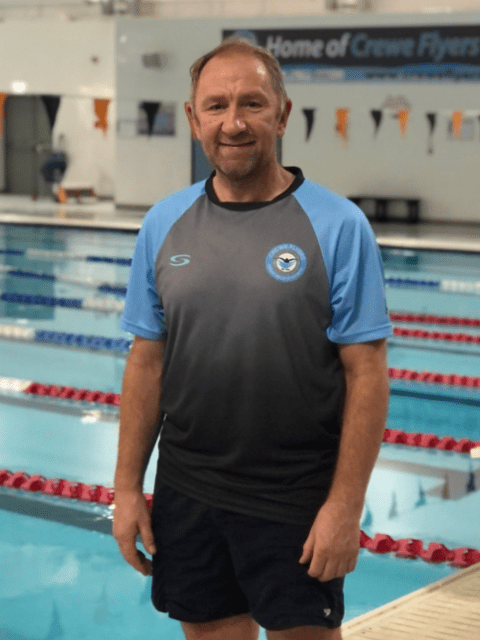 Adrian has been volunteering with Crewe Flyers since 2011.

Adrian swam competitively for Crewe Amateur Swimming Club between the age of 12-14 years and when he joined the Army at 16 years this allowed him to swim competitively again. He competed in Germany and the UK and his Unit made it to the BAOR Finals 6 years in a row in Berlin. This is the reason why he has always been interested in the sport and he gained his Level 1 Swimming Teaching qualification and Physical Training Instructor qualification whilst serving in the Army.

When his son Aaron joined Crewe Flyers in 2008, he became involved in different aspects of swimming life again by attending training sessions and galas with him. In 2011 he was encouraged by the coaches to help out at the club by volunteering in a coaching role with the junior swimmers.  He took on the role of teaching the ASA Levels 7-10 and also helped out with the senior swimmers and helped to produce swimmers to county, regional and national levels. He has also coached at Manchester and Stockport for 50m training sessions and attended Galas and helped on poolside as a Coach and Team Manager. He has also volunteered with land training (strength and conditioning programme) and also worked with swimmers in the gym by using a variety of training methods including weights, resistance training and aerobic workouts.

Adrian gained his Level 1 coaching qualification through Crewe Flyers in 2014 and is the current Volunteer Coach for the Rising Stars Squad who train on a Tuesday 7.00-8.30pm and Sunday 5.00-7.00pm.